We got a chance to try out our new seat for the bike trailer last night, but not in a way we wanted or expected....

My husband and I decided late last week that we'd go on a family bike trip to a large indoor playground on Sunday morning. In anticipation of this trip, I spent a good portion of Saturday adapting our new special-needs seat to fit my son comfortably and figuring out how best to secure it into our bike trailer. I sewed the chest-clip pieces of the seat so they would fit more snugly across my son's narrow chest, lengthened the lap belt so it would fit better over his belly (his belly isn't large, but the lap belt was too short; maybe we're missing a piece?), and figured out a way to use the bike trailer's existing shoulder straps and lap belt to secure the seat into it. 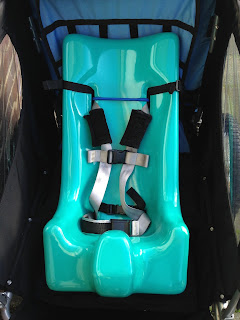 Around 10:00 Saturday night, I was just about finished modifying the seat itself and was taking a little snack break when my husband came downstairs with our son in his arms and asked me to dim the lights. Our son, who had been in bed since around 8:30, needed a diaper change.

We were changing his diaper together when he began coughing, forcefully. He had been having coughing fits like this off and on all day and, in fact, had coughed so hard right after eating his bedtime snack that he vomited it up. (He's probably getting a bad cold, I thought. The last time he had had a bad cold, his coughing fits had led to vomiting.) Now, post-diaper-change, he acted like he was about to vomit again, so I sat him up and cupped my hand under his mouth right before he threw up on me. My husband ran to get a towel and, then, a bowl. Our son threw up again. More concerning, his arms seemed a bit shaky.

Could this be a seizure? I thought. He had just been diagnosed with epilepsy at the end of December, so I'm still learning about seizures and what signs to look out for in my son.

My son has hydrocephalus, or excess fluid in his brain, which in his case was caused by a brain bleed that led to blockage of the normal flow of cerebrospinal fluid. The good news is that it can be treated---with a surgically implanted shunt that drains the excess fluid from the brain to the abdomen, where it can be reabsorbed. The bad news is that shunts sometimes malfunction. Vomiting can be a sign.

In case this is what was going on, we decided around 10:30 that we needed to take him to the emergency department at the Academic Medical Center in Amsterdam, which has a neurosurgery department that has my son's medical records. Calling an ambulance would be pointless because the only cure for a shunt malfunction is neurosurgery, which obviously cannot be performed in an ambulance. Also, while neurosurgery must be performed soon after signs of a malfunction, it need not be performed immediately; we had some time. So we needed to get ourselves ready to transport ourselves.

I ran up the stairs to mine and my husband's bedroom, where I grabbed some clean clothes for our son and changed out of my vomited-on pants. Soon afterwards, my husband and son came upstairs, and I remember my husband saying something to the effect that our son wasn't feeling well. It was then that I noticed that our son's arms were shaking again. I called his name. He didn't respond.

Ohmygod, he IS having a seizure, I thought.

So we ran downstairs, and I grabbed his monkey backpack from the stroller at the base of the stairs, ran into the living room, opened the monkey backpack, pulled out a syringe of his emergency anti-seizure medication, and began to furiously review the instructions for administering it. My husband laid our son on the floor, on his side, facing away from me.

Within a few minutes, he stopped shaking.