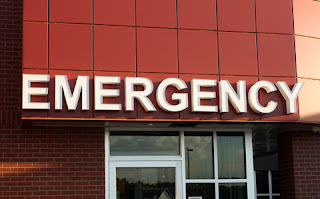 I have this memory from that night my son had a seizure, of me sitting on the couch, cradling my son like a baby, and us having the following conversation, with good eye contact:

But I cannot for the life of me remember whether this happened before or after his seizure. And it seems important now to know because it would help me answer this question: After his seizure, did we do the right thing?

The details of what happened right afterward, especially the order of events, are a little hazy:

I know my husband and I gave our son some emergency anti-seizure medication and afterward agreed that he needed to go to the emergency department at the nearest hospital. There was some debate about whether we should call for an ambulance (his preference) or go by bike (mine). The latter would take about 15 minutes.

I know that soon after the seizure I hurried out the front door to install our new special-needs seat into the bike trailer right in front of our house.

I know my husband called for me from within the house. I came running back in, and he said something about our son not being able to support his head while vomiting. My husband was kneeling on the floor with vomit on his shirt, trying to support our son in a sitting position.

I remember my husband asking me if I was done installing the seat into the trailer and me getting annoyed about his apparent impatience and rushing back outside to finish.

I remember we put our sleepy son into the trailer and were getting ready to leave when we realized we hadn't taken off the two chains locking the trailer wheels. I quickly unlocked and removed one of them. My husband couldn't find the key to unlock the other one and ended up frantically cutting it off with a hand saw.

I remember leaving for the hospital and discovering soon afterward that the back of our son's seat was leaning forward in the trailer, causing his head to droop forward a bit. We managed to fix it by putting his monkey backpack under the front part of the seat.

I remember my husband and I getting angry and frustrated with each other throughout the ordeal as we tried to respond in differing ways to this medical emergency.

But I cannot for the life of me remember: Was our son responsive after his seizure?

Should we have called for an ambulance?

When we arrived at the emergency department around 11:30 p.m., we were immediately led to a room, where I placed our son on a hospital bed. Person after person came into the room---placing an oxygen mask on him, placing heart-monitor stickers on his chest, asking us questions in English, speaking to each other in Dutch. My husband and I sat down in chairs a few feet from the bed and held hands and worried.

She said that for one (or both?) of these seizures, his eyes were to the left and weren't moving in response to their calls. Apparently this was a sign of a seizure, even though he wasn't shaking.

I asked the doctor this question.

She asked me to recount the order of events of the evening.

Our son was admitted to the hospital overnight for observation. There was only one extra bed in the room, for one parent to stay overnight, but our son's nurse kindly transferred us to a room with two extra beds so that my husband and I could both sleep in the same room as our son.

Our son did fine throughout the night and was discharged just before lunch the following day.

Should we have called for an ambulance?

Yes, according to the doctor who discharged him.

Last week I met with my son's psychologist (an orthopedagoog, actually, but basically a psychologist), who is a part of the therapeutic toddler group program he attends and who had requested this routine meeting. At the beginning, she asked about my son's latest hospital stay and how I was doing. I told her I was sad that he had had more seizures and that both my husband and I had felt sadder than usual in the following week. I recounted some of the details of the evening and told her I was questioning whether we had done the right thing. Should we have called for an ambulance?

She was very kind. She said: "If you had called for an ambulance, the person on the line probably would have told you to just observe him. That's just how Dutch health care is. Since the emergency medicine seemed to have worked, they probably wouldn't have sent an ambulance right then. Of course we'll never know for sure, but you probably got to the hospital quicker by bike."

So,  I'm telling myself to be gentle on myself. Everything turned out okay (my son seems like himself again), and I learned a valuable lesson: Our medical emergency plan for seizures needed to be updated. Our current plan is now to administer his emergency anti-seizure medication and then immediately call the Dutch equivalent of 911. Because we now know that the emergency medication itself isn't always sufficient.
Posted by Michelle L. Jones at 2:17 PM